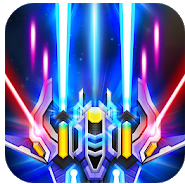 Galaxy Shooter - Sky Reloaded is a fast-paced top-down perspective free space shooter game. Required skills are more than fast reactions and memorising enemy attack war patterns.
The player must also have strategy skills to equip proper upgrades and use the appropriate skills during specific space missions.
Galaxy Shooter Commander,Space War is a classic game inspired by classic sci-fi movies and old school retro games like space invaders making a fresh but old style game for your Android mobile.
There are three game modes (Easy, Medium and Hard), and the goal of the game is to get as many lightyear points as you can before the end of the game.
Start your spaceship engines and join to this ultimate galactic space war game.
Find and upgrade the ship that fits your play style and matches up well in the missions
Enjoy the marvellous action and defeat waves of menacing Invaders in daily new missions.

Some of our unique features include:
* Over 40 ships to collect and upgrade. Each ship has its own unique weapons and two special abilities.
* Amazing Visuals – Silky smooth graphics with spectacular explosions !
* Procedurally Generated Content – Every game is unique.
* Unique ships with their own gameplay – Lots of spectacular weapons and power-ups.
* Location-based Leaderboards – Become the best in your home town and move on to the entire world.

Galaxy Shooter - Phoenix Space Reloaded has been installed between 10,000+ times by users and has an average rating of 4.4 in Google apps store. 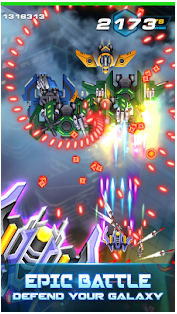 Galaxy Shooter - Phoenix Space Reloaded game size  48MB and can be installed on any Android device running version 4.1 and up.